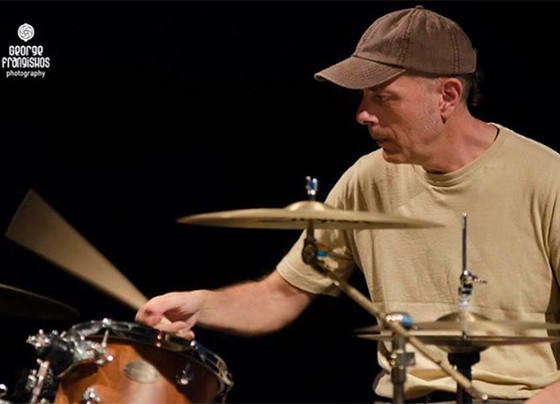 Born in Piraeus in 1960. He studied Drums with Costa Pagonidis at the New Conservatory of Thessaloniki, as well as classical percussion and theory.
He has composed music for the film “Roads and Oranges”,the theatrical performances “Fafsta” by Bost and “The Cyclops” by Euripides, the “Musical Workshop” of the Thrird Program, for the band “Bosphorous”, for the short film “Barabas 2010” and others.
He has worked with Mano Hatzidaki, Xilina Spathia, Alkinoo Ioannidi, Niko Portokaloglou, Orfea Peridi, Dionisi Savvopoulo, Eleni Tsaligopoulou, Mariza Koh, Padeli Thalassino, Socrati Malama, Thanasi Papakostadinou, Mixali Siganidi and others.
He has taught drums at the “ School of music research and experimentation” in Athens for 6 years. Also for 2 years at the the “Art Music School- Yiorgos Fakanas”
Since 2008 he is a member of the band “Hainides”. He is a founding member of the band Mode Plagal, that has been his greatest expressive vehicle from 1990 onwards.
Mode Plagal have appeared in many concerts in Greece and abroad. Such as:
Barbican Theater-London, England
Rhythm Sticks Fest.-Queen Elisabeth Hall-London,England
Fringe Festival-Bath, England
Cardiff Festival-Cardiff, Wales
Paradiso Club-Amsterdam, Netherlands
Lux theater-Nijmegen, Netherlands
Muziekcentrum-Utrecht, Netherlands
De Warande-Turnhout,Belgium 5th EuroSyrian Jazz Fest.-Damascus & Aleppo, Syria
Earth Fest.-Prado del Ray, Spain
Hayall Club-Constantinople , Turkey
Jazz aux Oudayas-Rabat , Morocco
Algiers, Algeria
Jazz Weekend Festival-Athens, Greece
2ndEthnic Jazz Festival- Athens, Greece
Internatioanal Jazz Festival- Athens Gazi, Greece
Internatioanal Jazz Festival- Athens Likavitos, Greece
Gaia Festival-Thessaloniki, Greece
As well as many conserts in Cyprus
Also with the group “Vosporos & Mode Plagal” in Athens, Smirni,
Amsterdam, Hague and Utrecht.
Recently Mode Plagal worked with Moroccan singer and virtuoso on the oud,
Majid Bekkas, at the Onassis Cultural Centre.

In the American magazine
“Modern Drummer”,was published in 1997 a prasing review related to the first album of the band.

First, let’s get past the lovely chauvinistic surprise that there is a bracing jazz and progressive rock scene in northern Greece. Mode Plagal is hipper than any new American record I’ve heard in a long time.
Blending jazz, funk and a dash of new age color with Greek folk music (and the seamless “odd” meters that have confounded lesser civilizations for centuries), the group makes a case for fusion that might have saved the genre twenty years ago. Working mostly without a bass player (guitartist Kleon Antoniou fills both chairs admirably) and evoking a utopian ensemble that could include Cecil Taylor, Gary Husband and the master drummers from half a dozen African villages, Mode Plagal takes traditional dances and carols from Macedonia and Thrace and grooves them to death. Their own forms are equally engaging: “Somebody Is Falling (Outside My Window)” sounds like a tango class taken over by the Tonny Williams Lifetime.

The hour-long CD, boldly improvised and utterly without filter, was recorded with sumptuous, edgy, pristins clarity. Drummer Takis Kanellos shines throughout: His drum sound is expansive, his wilder cymbals enjoy equal time with more conventional metals, his swingin fills get right to the point, and his patterns combine power and aggression with casual elegance.
On a recent visit to Thessaloniki, Billy Cobham listened to a number of Greek jazz albums. This is the one he bought.