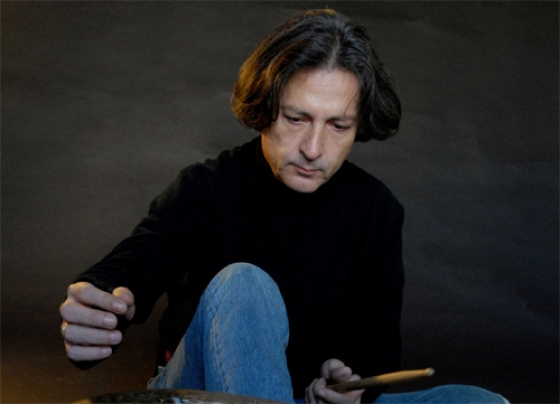 curriculum vitae
Christos Gotsinas musician/drummer
Christos Gotsinas was born in Athens and started playing drums professionally when he was just thirteen years old.
His first influences in music came from funk, rock, r & b and jazz in the 70’s, as a member of groups such as sunset, live s, hoi polloi, a.o. During that time he also took part in the praxis festival and other jam sessions.
Self taught at first, he went on to study music in France at the school of Kenny Clark / Dante Agostini. He spent two years in paris, during which he took part in among other jazz related activitiew, the rock operas Moses and Guillaume, on the life of Appollinaire.
The 80’s found him collaborating with ZMikis Theodorakis, maria farandouri, Eleni karaindrou, Zulfu Livaneli and other musicians.
The decade 85-95 found him in new York, dedicated to jazz, and studying at Drummers Collective with masters of the art, like Louis Bellson, Jimmy Cobb, Horacee Arnold, and Mike Clark.
Besides jazz he also studied afrocaribbean and brazilian music, with -among others- Frank Mallabe, Horacio (el negro) Hernadez, and Bobby Sanabria, something that he carried on later as well in Cuba, with Amaldito Valdez.
For a long time he was a member of the brazilian ensemble Εmpire Loisaida alongside Kiro Batista, Nana Vasconcelos and Dom Um Romao.
During his stay in New York he took part in a variety of jazz and funk projects, collaborating–and in some instances as co-producer– with musicians such as Chip Jackson, Ronnie Drayton, Delmar Brown, Steve Thornton, Nana Simopoulos, Uptown Horns, a.o.
For a long time he was the drummer of the sessions of Barry Harris’s University of the Streets in New York. (Tommy Turrentine, C-Sharp)
Today he lives and works in Athens.
In 2003 two personal records were released by Ankh Productions, entitled “in the desert land” and “40.45”.
Among his most recent activities are his collaborations with the singer Maria Farandouri, the ensemble Berliner Instrumentalisten, the Turkish musicians Zulfu Livaneli, Ηalil Karadouman, and Ercan Irmak, the group Elefsis and the singer Haris Alexiou.

e-mail: This email address is being protected from spambots. You need JavaScript enabled to view it.