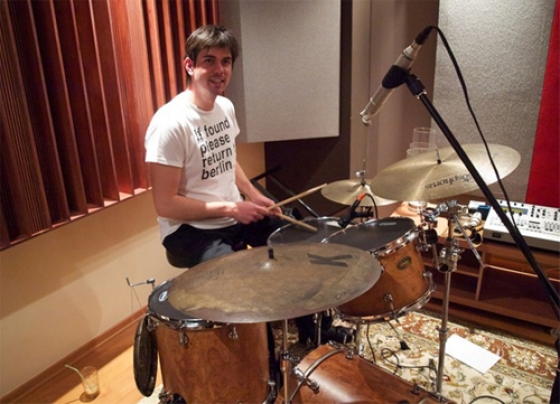 Christos Konstantinidis, born in Serres, Greece on the 14th of March 1985, has been developing a passion for music since the age of twelve when he got his first drum courses from Sotiris Ladias. He has devoted himself professionally to music ever since the completion of his school education. With a particular interest for improvisational music and Jazz, he enrolled to the conservatory of Thessaloniki where he studied subjects ranging from Harmony and Theory of Music to Classic Percussion until he decided to attend in 2005 a preparatory year in the conservatory of Rotterdam in Netherlands, where he completed his rich musical education in 2010. He has worked, co-operated, learned and performed with various important musicians, from a contribution at an early age to the recording of a new album by the well-known Greek band “Μωράστη Φωτιά” to accomplished musicians such as Hans van Oosterhout, Peter Ypma, Joost Kroon, Joost Patocka, Lucas van Meerewijk, Owen Hart jr., Hein van de Gein, Kris Goessens, Jeff Ballard, Billy Hart, James Carter, John Abercrombie, Mark Guilliana, Jim Black. He has been an active performer with various projects, both in Greece and abroad (Cyprus, Netherlands). Since 2010 he is based in Athens where he is performing and teaching