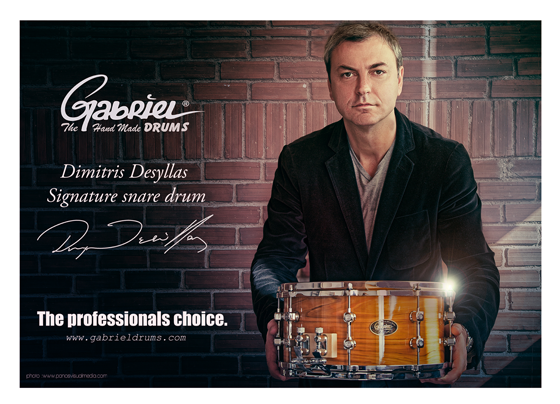 Dimitri Desyllas  Born in Corfu, Dimitri took his first steps in music at the Philharmonic Society of Corfu. He continued his music education at the Percussion School of the Athens Conservatory with N.Koratzinos. As a scholar of “Alexandra Trianti”, “Alexandros Onassis Foundation for the public benefit” and the State University of New York he has been given the chance to study under R.Kohlof and R.Des Roches in New York and R.Siegers in Berlin.He was largely influenced by his encounter with S.Gualda at an early age. His continuous soloistic activity includes a great amount of world,european and greek premieres. His repertoire contains works ranged from J.S.Bach to I.Xenakis, as well as works by contemporary composers such as Th.Antoniou, G.Koumentakis, G.Kouroupos, M.Borboudakis,V.Nikolaou, J.Psathas, F.B.Mache a.o.Among others he has presented the premiere of I.Xenakis “Persephassa” in a form where a single percussionist performs all six parts ,at Helsinki in the Fall of 2000. He has worked together with renowned personalities of the arts such as R.Willson, M.Argerich, G.Burton, A.Karabekian, Sir N.Marriner, R.Gollani a.o. and has appeared as a soloist in significant music halls from New York to Beijing. Awarded for both his soloistic and composing activity ( Union of Greek Critics for Music and Theater, Greek Ministry of Culture a.o.) he has recorded for the labels BIS, Blue Note, EMI and Albany Records, for the Bavarian Radio, the Greek Radio, Mezzo Channel a.o. He holds the position of the solo timpanist at the National Symphony Orchestra of the Greek Radio and is a collaborator of Megaron the Athens Hall and Kamerata( Friends of Music Chamber Orchestra) since 1992. He has founded the percussion ensemble Seistron and is the founder and artistic director of the percussion ensemble Typana, with which he has realized a number of collaborations with greek and foreign institutions ( Zurich Ballets, National Chamber Orchestra of Armenia,Hellenic Festival, Megaron the Athens Hall, European Cultural Center of Delphi a.o.) performing a wide range of repertoire. He has been a member of the Music Faculty at the Ionian University (Corfu) and a professor at the Athenaeum Conservatory in Athens until August of 2009.Since September 2009 he is a professor at the Athens Conservatory. He has been a member of the jury for the Percussive Arts Society at the international competition 2012 in Patras.As a percussion tutor ha has given numerous master classes on subjects as ” the percussion music of I.Xenakis”, “Rythmology “, “the art of timpani “, “the art of snare drum ” a.o. Recently, after an invitation from Megaron,the Athens Hall and Diazoma (organization for the ancient theaters in Greece ) he made the opening of the archaeological site of  Dionysos Theater below Acropolis, performing ” Psappha ” of I.Xenakis and the world premiere of “Monologos” by G.Kouroupos under the title ” 2.500 years after”. Dimitri Desyllas is the founder and general director of Kyklos ensemble .