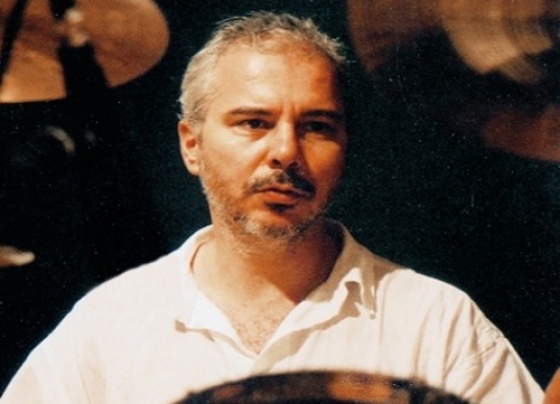 Albert Panagiotopoulos is a well known Athens based drummer with musical studies in the US (“The Drummers Collective” of  N. York) and a remarkable career as a session musician with top Greek artists (J. Spanos, G. Hadjinassios-M. Hadjigiannis, M. Fragoulis, Lakis Papadopoulos, C-real, etc.) with Rock and Jazz groups too, playing in top venues of the country (Half note, Lycabettus theater, etc). He has also taught modern drumming techniques in various music schools in the greater Athens area (N. Touliatos Music Praxis school, Municipal conservatories, Glyfada odeon and in private).  His book entitled “Complete Drum Method” was  published in 2001 by F. Nakas, the most prestigious music publishing company in Greece and it has made a hit. He is the representative of  “The Collective” in  Greece, he cooperates with London College of Music (LCM), used to be a featured columnist for the “Soundmaker” magazine and has performed in many tv shows. He has a University of Patras diploma in Physics and he was the drummer of the Greek air forces band.

Albert has created two excellent albums called: “Visionary World” and “Hyperfly”, as a composer and an arranger. These particular works contain glimpses of the Mediterranean, the Middle Eastern culture, the Balkans, the Greek folk music, the Blues and the Afro Cuban heritage. All these in a fresh Jazz – Rock – New Age style. It’s a musical panorama, an amazing journey through many parts of the globe. The cd`s are now distributed by the Greek music composers union (emse). The musicians appearing on the albums are also top notch (V. Rakopoulos, A. Ladopoulos, G. Kiourtsoglou, M. Loutas, A. Orfanos, J. Zevgolis, M. Theodosakis and more) and have contributed to amalgamate the numerous musical currents into a unified whole. The resulting music is a chant for global peace and self development.

Radio producers, newspaper and magazine columnists have welcome these works with many articles and interviews. Here are some critics in top music magazins in Greece, about:
“Jazz moods pave the way for  the Afro Cuban sounds. Excellent” Difono, August 2004

Tunes from the cds have been used in compilations and tv shows.