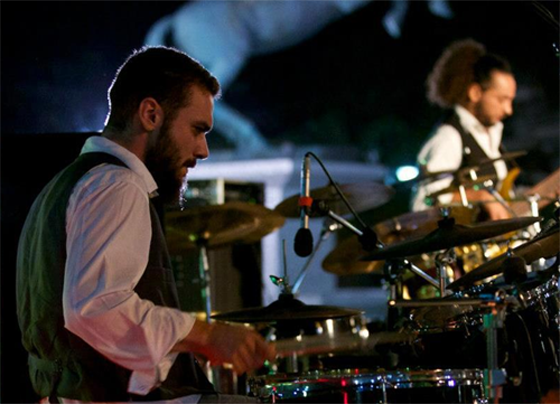 Dimitris Klonis was born in Athens in 1984. By the age of 14 he begins his studies on the drumset under the guidance of Petros Daktilidis. Later on the great John Floros enters his life and as a result he passes him the drumming knowledge and legacy that he was taught from the great master Alan Dawson. In 2010 and slightly after Dimitris’ graduation from National Technical University of Athens, he is immediately accepted in Conservatorium Van Amsterdam but also in Rotterdam Jazz Academy. He studies for a very short period in Amsterdam where he had the chance to take lessons from Lucas Van Merwijk, Maurcel Serierse and Victor Oskam. He has also studied jazz harmony with Gregory Batsis and holds a degree in harmony (2009) and a degree in counterpoint(2012). He has attended clinics an private lessons with giants like Adam Nussbaum, Kendrick Scott, Jojo Mayer and Akira Jimbo. Within the years he has collaborated with great local jazz musicians such as Yiotis Samaras, George Kontrafouris, Pantelis Mpenetatos, Takis Paterelis, Kostas Konstantinou, Dimitris Sevdalis and Vasso Dimitriou as well as some foreign artists like Femi Temowo(Roots,Amy Winehouse), Michael Weisberger(Milo Z), Aline de Lima, Adedeji Adetayo, Yoel Soto. He has also collaborated with Foivos Delivorias, Martha Fritzila , Petros Theotokatos and Doros Dimosthenous. He currently lives in Athens, where he is envolved in lots of projects, gigging, recording and teaching.