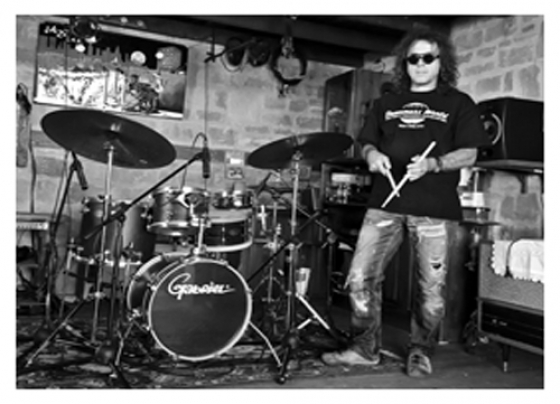 He was born in Kozani. His first contact with music was at the age of 12 when he played the trumpet in the Philaramonic band of his own town. Later he takes part in bands discovering the magical world of blues and Dixieland being affected by the famous and legendary (trumpet player) Louis Armstrong. In the late 1980s he was captured by the world of drums being affected by rock music. At the same time he starts studying at the New Conservatory of Salonica in the jazz department with his drum teacher Kostas Pagonidis. In the early 1990s he starts his musical career as a jazz musician participating in different jazz bands. Being a member of the “Blue Train” band he plays for 3 years together with the well known American guitarist Wayne Brasel. This collaboration led to the creation of a cd with the title ”Sky paths”. Later on after many influences and quests through the Greek traditional music the trio Apopsis is created. Recently he has attended drum courses in New York by Marvin Bugolo Smith,Emmanuel Harold, Ludwig Afonso, Jason Brown, Obed Kalvaire, Mark Guliana,Donald Edwards, Engin Kaan Gunaydin and Alvester Garnet. He worked together with outstanding Greek and foreign musicians with Giotis Kiourtsoglou,Christos Rafailidis,Vaso Dimitriou,Vicky Almasidou,Makis Stefanidis,Ioannis Ikonomidis, Wayne Brasel ,Milcho Leviev,Danny Hayes, David Lynch, Olek Chaly etc. He has attended seminars throughout Greece and abroad from Kostas Anastasiadis, Vinnie Calauta, Peter Erskine ,Cindy Blackman, Al Foster, Trilok Gurtu,Dave Weckl etc. He has participated in festivals in Greece and abroad (festival,Mexiko Euro jazz San Luis Potosi, ServiaXXIII international Nisville jazz festival,Sani festival in Greece). He has participated in many cd recordings of Greek artists as a session musician.