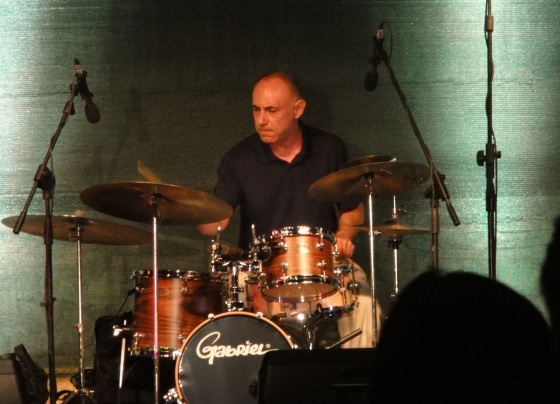 George Polyhronakos started playing/studying the drums at the age of eighteen and four years later
he entered the Music School (Jazz Department) – Victorian College of the Arts
(Melbourne) completing the music course in 1988.
During the same year he was honored with the Gwen Nisbet Award for Outstanding Musical Talent.
While living in Australia he played and recorded with many prominent Australian musicians such as:
Graeme Lyall, Tony Gould, Lisa Young, Ben Robertson, Linda Cable, Christine Sullivan, John Sangster,
Joe Chindamo, Doug de Vries, Keith Hounslow and others, as well as visiting artists: John Hoffman (USA),
Peter Leitch (Canada) and Rudolf Josel (Austria).He also became known as a drummer/composer while working
in Melbourne with his own quartet under the title “Stringtalk” which performed mostly his original material.

He has also performed with international visiting Artists such as:Jari Perkiomaki (Finland),
Theodosii Spassov (Bulgaria), Andy Sheppard & Juliet Kelly (U.K.) and Essiet Okon Essiet &
Jack Walrath (U.S.A.) in Athens.
in 2000 he released his first personal CD under the title “BLINK” presenting 11 of his
original compositions/arrangements along
with 11 great Greek improvisers combined in various settings and playing styles.
Other than performing mostly with Jazz oriented combos around town,
he teaches drums at Music Schools of Athens as well as privately whilst being a member
of the L.C.M. Exams (London College of Music) network in Greece.
In February of 2012 he completed his Master Studies in Music at the Ionian University
(Corfu-Greece) with distinction.